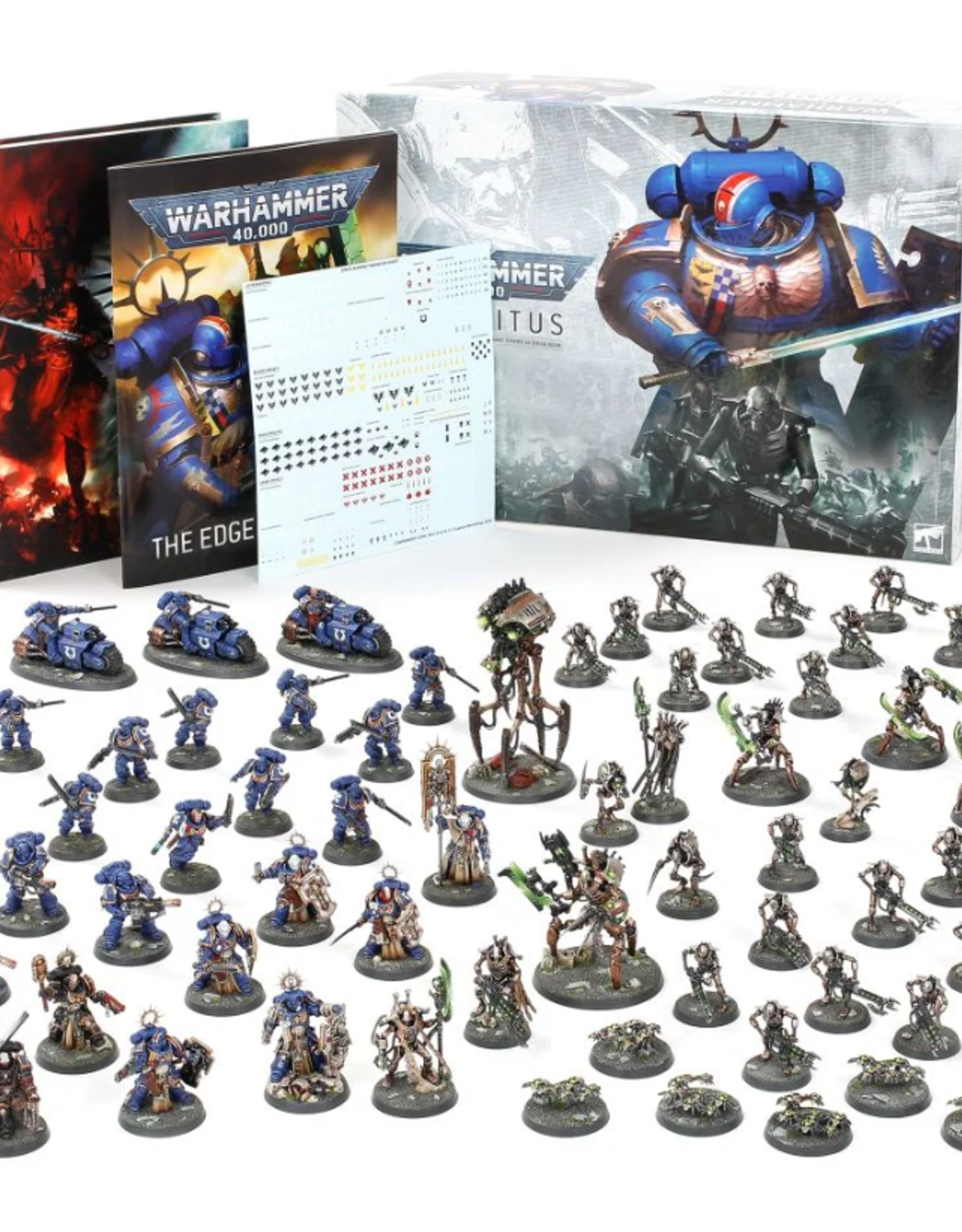 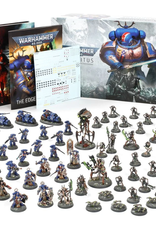 Restock in limited quantities on Thursday 7.30.2020. Purchases before that date will be filled on Thursday. Local pickup and delivery only, this item will not be shipped.

The galaxy writhes in the mailed fist of all-consuming conflict. The Imperium of Mankind teeters on the brink of annihilation, beset upon all sides by heretic warlords, daemon-summoning witches and rapacious alien empires. In every star system and upon every planet, fierce battle rages as loyalists, heretics and aliens tear reality itself apart in their war for dominance. Every day the flames rise higher.

This is a more terrible era than ever before, and there is no peace amongst the stars...

If you're looking to plunge headfirst into the new edition of Warhammer 40,000, look no further than this glorious boxed set. Warhammer 40,000: Indomitus comes complete with two powerful armies, pitting the mighty Space Marines against the immortal machine race known as the Necrons for control of the Pariah Nexus. The set also includes an Indomitus-exclusive version of the Warhammer 40,000 Core Book, which delves into the game’s grimdark, futuristic setting and provides a full set of rules for playing thrilling games with your Citadel miniatures.

1x 368-page Warhammer 40,000 Core Book (hardback): Discover the lore of Warhammer 40,000 – it’s bleak dystopian setting and learn to master magnificent armies of valiant warriors, dread aliens and more on the battlefield. This vast tome of knowledge included all of the game’s core rules and 39 missions designed to cater for your preferred size of game and favoured play style. The book also includes the rules for the innovative Crusade campaign system, which enables you to develop your army from inexperienced recruits to stalwart veterans over the course of several battles.

1x 24-page campaign booklet – The Edge of Silence: This supplementary booklet is exclusive to the Indomitus set and tells you the story of what befell the vanguard forces of the Indomitus Crusade’s Battle Group Kallides when they ventured into the ominous, seemingly abandoned region known as Pariah Nexus. The booklet also includes 18 datasheets that feature all of the rules that enable you to field the stunning miniatures in the box in a game of Warhammer 40,000.

61x Plastic Push-fit Citadel Miniatures: At the heart of the Indomitus set are two armies of brand-new miniatures, each cleverly designed so they can be pushed together without the need for glue. Each force includes a flexible range of powerful units armed with devastating weaponry and wargear, and can easily be bolstered with additional reinforcements to act as the elite core of a larger army. These models include:

24x Space Marines
They are the Emperor’s Angels of Death. Each is a genetically engineered superhuman warrior, bred for war, clad in inviolable armour and armed with the finest wargear in the Imperium.

37x Necrons
An ancient machine race who once ruled the stars at the head of a vast, galaxy-spanning empire, the Necrons have risen again from their dormancy to reclaim that which was once theirs.

1x 20-page Assembly Guide: These stage-by-stage instructions will show you how to assemble all the miniatures in the box.

1x Space Marines Transfer Sheet: Use this enormous variety of waterslide decals to decorate the armour of your painted Space Marines with identifying iconography.

Warhammer 40,000: Indomitus is only available while stocks last, so don't hesitate to order your set today.